What an adventure! Life certainly has thrown some curveballs at us these last few months, but I’m so thankful that God is still on the throne.

After losing my brother near the beginning of last month, I realized—possibly for the first time ever—that life can reallymess up your schedule for you. But no matter what’s been going on, God shows Himself faithful. While lots of things happen that we don’t want—and definitely don’t expect!—He’s still there, still taking care of us.

After the funeral, our family went through a lot of readjustments and reassignments. Some of it had been taken care of even before the funeral, but some hadn’t been, and what with lots of different people through during that time we didn’t have “normal life” happening at all anyway. And oh, what a blessing it was to have so many caring people gather around us during that time! 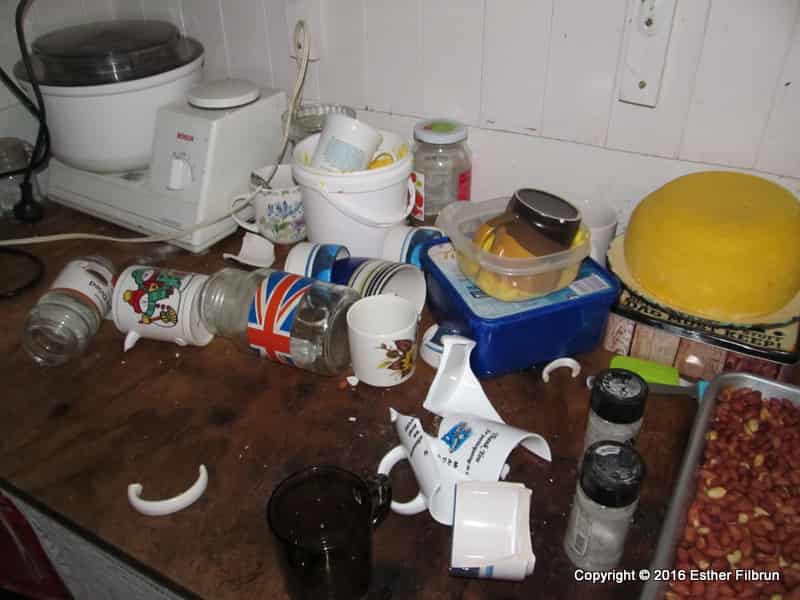 Quite a few cups didn’t actually break–and as you can see in the picture, two different ones landed in the butter, thereby escaping harm!

Two weeks ago today, Grandma (Mom’s mom) arrived. She’s staying the whole month, and while that’s been going way too fast we’re so thankful that she can be here. That same day, I got my learner driver licence (learner permit), which is somewhat exciting and more than a little scary. I still don’t do backing very well, and don’t like intersections all that much. Open road is okay, though!

Last week, we headed way down south to a little out-of-the way village named Cass. Some friends of ours own a bach (cabin) down there, and we spent a delightful four days there. It was a good time for our family to just relax, take in some scenery, play games together, and overall just recouperate from the previous month’s activities. We’re so thankful we could do that! 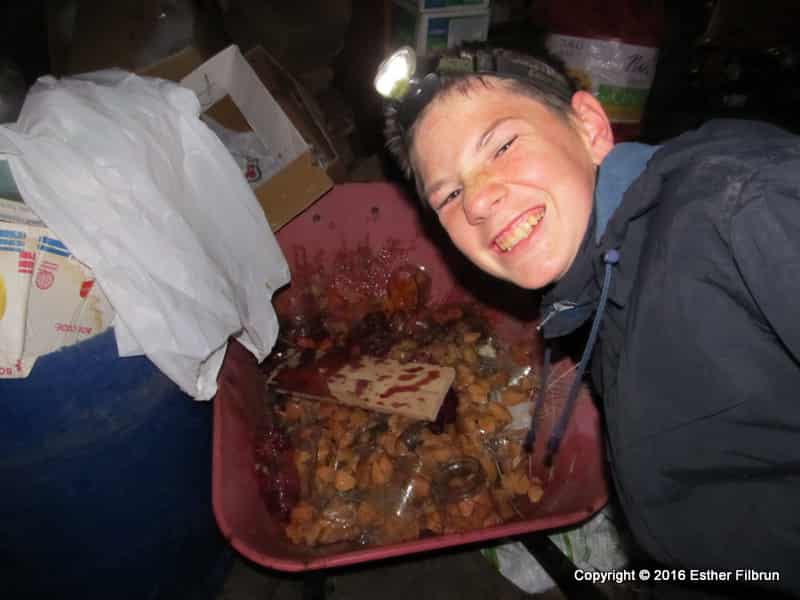 Just after the quake: Cleaning up broken jars of fruit. 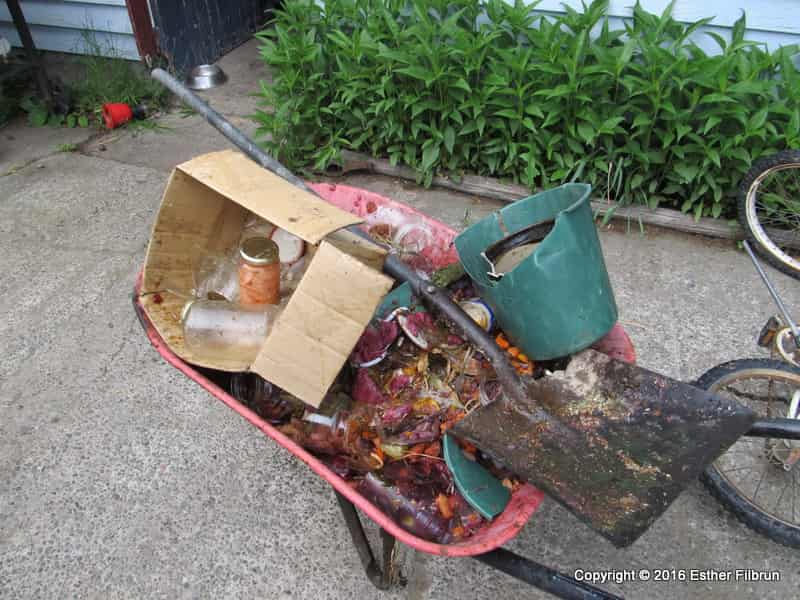 Then, early this morning, we awoke to a tremendous shaking. I don’t think I really woke up for several minutes, as I had been sound asleep when the earthquake started. Eventually it registered that the earthquake was getting worse, not better, so I crawled out of bed (couldn’t even walk—it was shaking too much!) and laid down beside it on the floor. I know not everything was registering then, but I do remember it was very noisy and very violent. Lots of books and other bits of things were thrown around in my room, creating several interesting piles to sort through and put back in order later. Incredibly, the one thing I thought would probably fall in a quake—a lamp on the top of my computer desk that I’ve accidently jerked down before—ended up falling the other way, landing on some books that had already collapsed. I’m thankful; it’s one less light bulb to replace, as those are already normally in short demand around here!

As far as damage around the place, we actually haven’t had much. Quite a few preserving jars were thrown of the shelves, but the majority stayed put comparitavely speaking. Mom’s favorite stack of crockery serving bowls was thrown to the floor, and we lost a few plates and regular bowls too, I think. And little things like tea cups. Overall, though, considering the amount of damage the quake did in other places, we got off very easy. I really feel sorry for those who have lost their homes—I’ve heard of at least five homes that are condemned, and I wouldn’t be surprised if there are quite a few more before all the inspections are over. Not to mention the people who have terrible messes that still need to be cleaned up, and the ones trapped in the different towns and valleys by impassable roads. 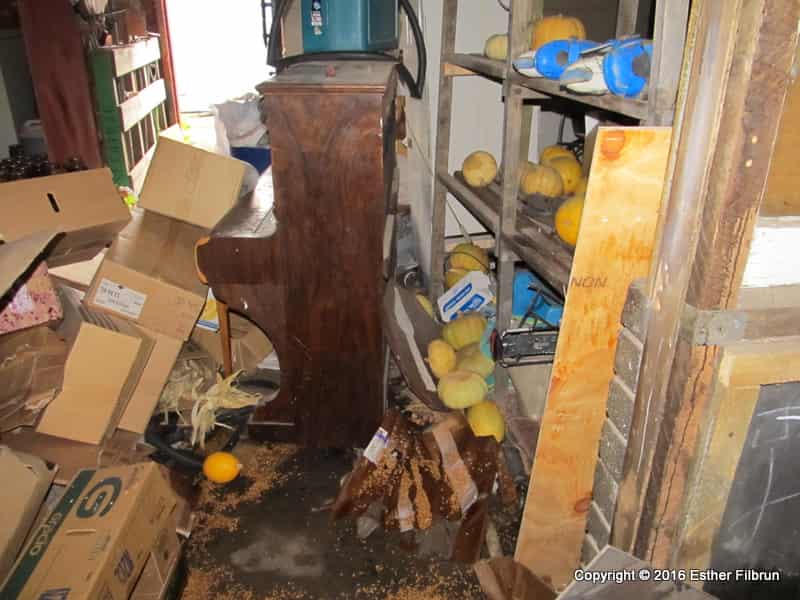 The piano was flat against the shelves before the earthquake, and the boxes were in a stack to the left. The squash were all on shelves before the quake. And a bucket with wheat for the cow splashed all over the floor, although it (thankfully) didn’t fall off the shelves. Just lost 2-3 in. of water and wheat.

Yes, we have much to be thankful for. We’re still all alive and well, still have a place to call home and plenty of food, water, and electric, and haven’t sustained much damage. But even for those in the thick of it, I think they could too say that they’ve been blessed. It could be so, so much worse.

The earthquake could have hit at 12pm, instead of midnight—if it had, there would have been a lot more fatalities along the roads where slips (landslides) have completely blocked the traffic. 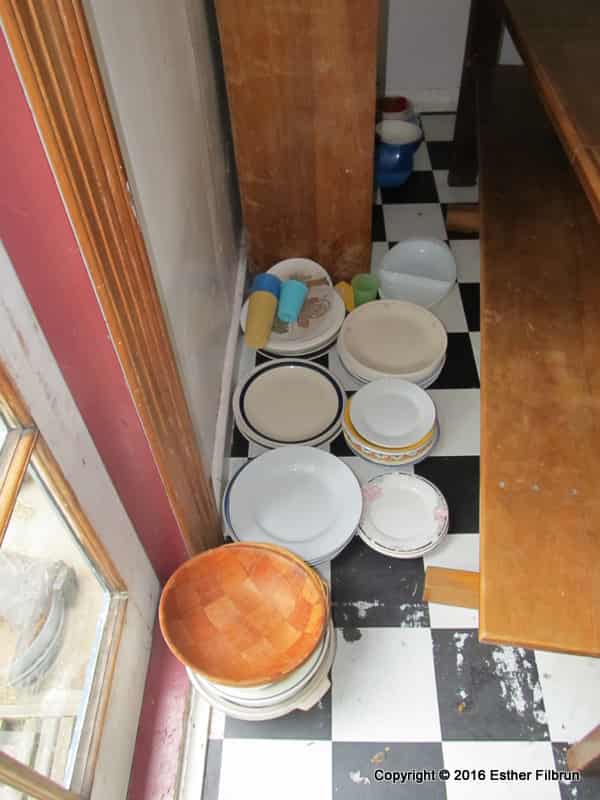 After the quake, we moved all remaining plates and bowls to the floor. Just in case there was another biggie. Didn’t want to risk losing any more! 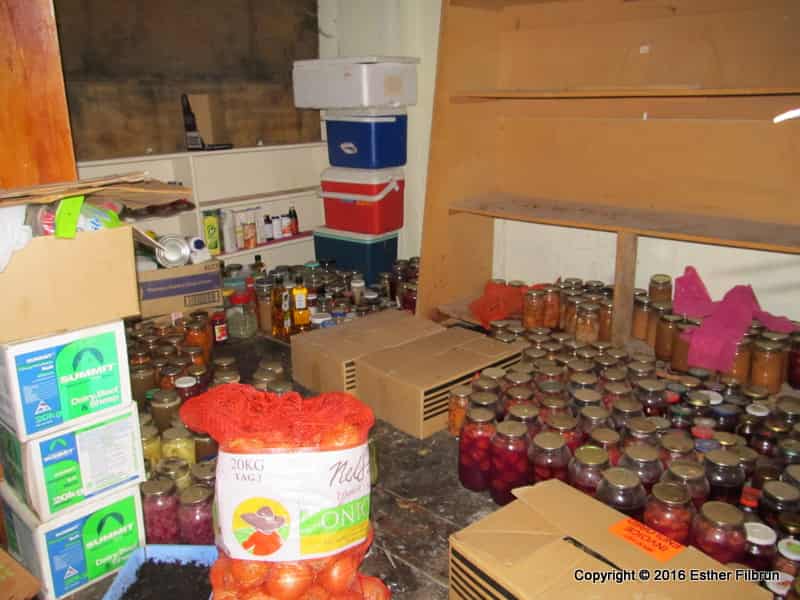 We also moved all surviving jars to the floor. They stayed here for several days before my brothers put up barricades on the fronts of the shelves.

The tsunami could have been much, much bigger—as it is, I don’t believe there was much damage at all.

We could be in a third-world country right now, and not have the blessings of plenty of helicopters on hand to help get provisions into places that have no other access. 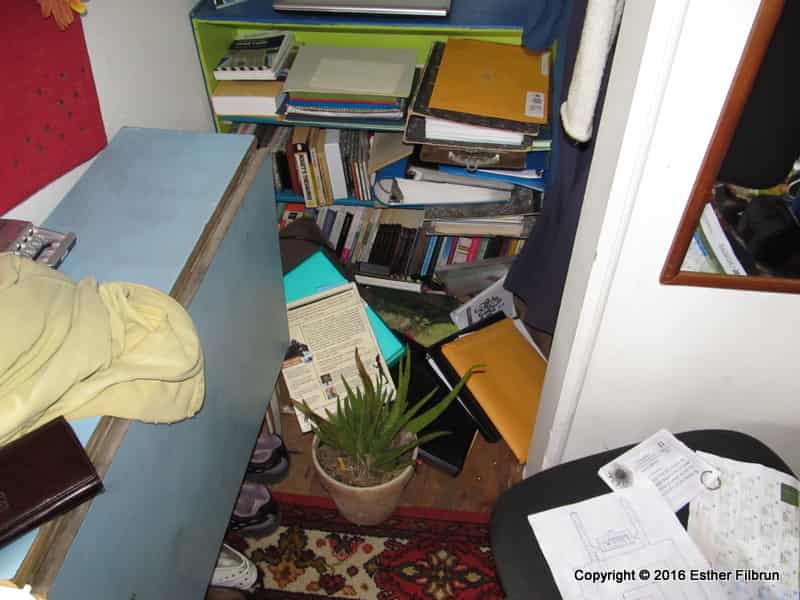 Stuff that fell down in my room. The plant was also tipped on its side after the quake. 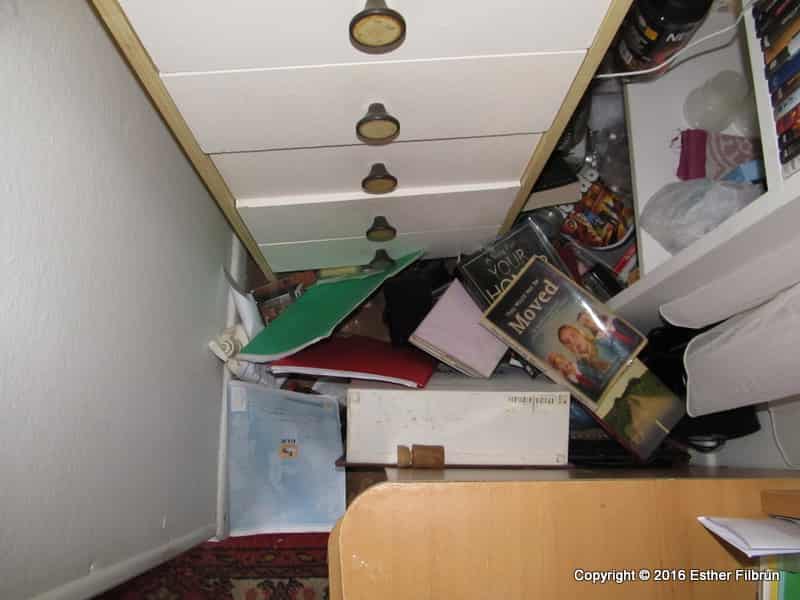 Lots of books from my desk fell to the floor.

We could still be without power, phone, and internet—and yes, many still are, but almost everyone has some form of contacting the outside world now, and that makes it so much easier for everyone!

That’s just a few of our many blessings. I’m reminded of Jeremiah, and how in the midst of his crying about the desolation of Judah he breaks out in praise and says,

“It is of the LORD’S mercies that we are not consumed, because his compassions fail not. They are new every morning: great is thy faithfulness. The LORD is my portion, saith my soul; therefore will I hope in him. The LORD is good unto them that wait for him, to the soul that seeketh him. It is good that a man should both hope and quietly wait for the salvation of the LORD.” (Lamentations 3:23–26; emphasis mine)

Yes, the Lord is good to us. Even in the midst of trouble, He’s there guiding, protecting, holding, and being with us. Our God is so good!

Today, as I was mulling over this fact, a song came to me. I don’t know if it will embed here or not, but I’ll try. I thank the Lord over and over for the hope that we have!

This evening, as I am thinking over the past 20 hours’ events, I remembered a couple other encouraging references too. “Lo, I am with you alway, even unto the end of the world.” (Matthew 28:20) and “Have not I commanded thee? Be strong and of a good courage; be not afraid, neither be thou dismayed: for the LORD thy God is with thee whithersoever thou goest.” (Joshua 1:9) 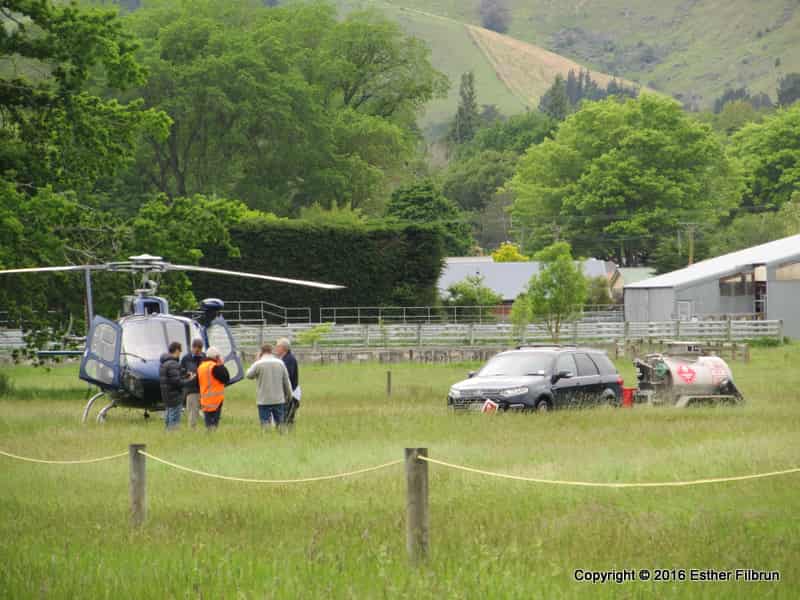 Relief work—lots of helicopters have been in and out every day since the quake. So thankful for those guys!

So as tomorrow will more than likely bring plenty of new aftershocks, as the many different helicopter pilots will spend another day ferrying food and other supplies up there and bringing people back (one refuelling station is right across the road from us, so we hear a lot of them coming and going), we can rest assured that the Lord is with us. That He’s watching out for us. 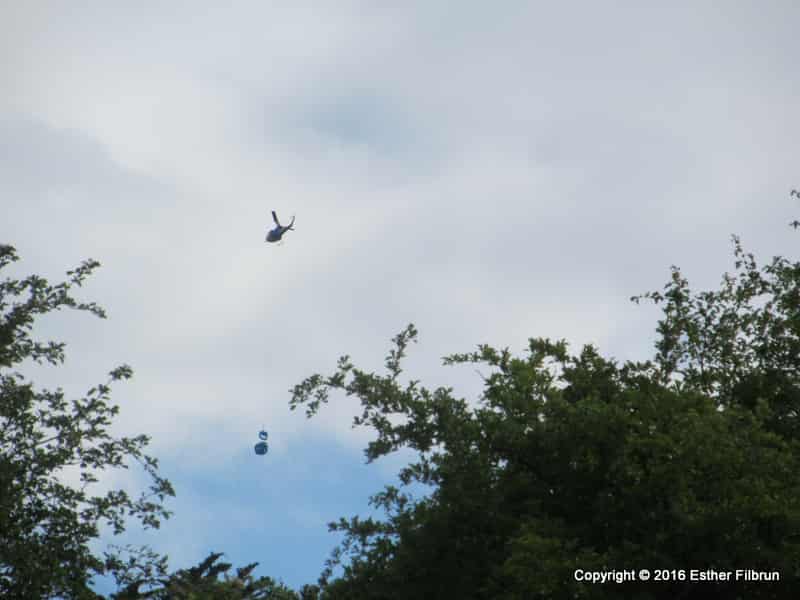 One of the many things airlifted to Kaikoura. This is a roll of pipes, I believe—most likely will be used to help repair the sewage and water systems that have been broken in the quake.

No, life isn’t back to normal yet. We’re constantly developing a new normal, but that’s okay. That’s the way things should go.

Whatever you’re facing, friend, know that the Lord is with you, too. He loves you. Rest in that love.

P.S. Mom has a few more pictures on her blog. Check it out here.